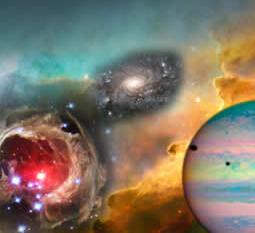 I find myself flying throughout the universe within the very heart of God. Galaxies, star clusters, planets, sights, colors and sounds zoom past me. At one point I see multiple planets where various categories of angels or more accurately heavenly beings dwell. These angelic type beings are very large and white, pure white, like marble statues. Just looking at them I’m suddenly filled with the knowledge that these heavenly beings carry the purposes of God and the destinies of men and women. They are eager and ready to be sent. Some are very old carrying the destinies and inheritances of generations.

I knew that some had been sent but the people who initially received them wearied of the responsibility and laid them down. Others belonged to those who had served faithfully and finished their work. They were now waiting for their next assignment. Some had never yet been assigned - some because it was not yet time and others because no one had ever asked for them.

11 Heavenly Beings
Floating above these planets, looking upon these majestic beings I knew that some of them belonged to me, I was their assignment. So with a boldness and freedom that this amazing atmosphere affords I asked the Lord to give me what was mine. Instantly three heavenly beings where launched forth and entered my heart like streaks of brilliant white light. Maybe it was because there were so many waiting to be assigned or maybe it was because I felt so completely safe and secure, I’m not sure but I asked for more, “Lord give me more, a double portion” and five additional beings where launched. Just like their brothers, like brilliant rockets, they too entered my heart. My body reacted to their entry, almost like being shot but without the blood or pain. A third time I asked the Lord for yet more and three final beings where dispatched. Eleven heavenly beings in all carrying the purposes of God and the destinies of men and women… dispatched… assigned… to me.

Military Dress
As I stood there, floating actually an angelic being flew up to me and placed golden epaulets on each of my shoulders, the type worn by naval captains. Next a second angelic being approached and placed a purple sash across my chest from my right shoulder to my left hip. A final being approached and placed a white naval hat upon my head. It had a black, shiny black brim on it reminiscent of the type of hat a naval officer would wear. It’s now that I remember that today is Veterans Day

GO!
As I look around I can see planets and stars and comets, the heart of God is alive with activity. I feel a great rumbling; all of creation seems to be shaking. Suddenly I hear the voice of God command GO! I find myself launched from the mouth of God and heading toward the Earth like a missile. I’m brilliant with sparkles of light and color trailing behind. I see myself impact the Pacific Northwest of the United States with great power. Three things happen simultaneously upon impact. First I see a ripple in time and space spreading out from the point of impact in Southeastern Washington State through the entire Northwest. Next I watch a trail of light looking very much like the original, jump from Kennewick, Washington to South Central Japan, landing in the Kobe / Osaka region. Finally, the light I bring, like fire from the heart of God ignites the fuses of many other people, some from my church and others from the region. I see many others launched like fireworks or missiles from Kennewick throughout the world. I saw people sent to Russia, Mexico, China, Japan, Africa, Australia, Eastern Europe the UK and other countries.

It’s the Father’s love and it’s, from the very heart of God. It set captives free and launches them into their destinies. I know that this is the light and the fire I have carried back with me.

Back On My Face
At this I… recover and find myself still on my face in the center of my little Montana log cabin. I get up and quickly record this amazing encounter in the pages of my journal. It took me days to recover emotionally. Just the though of these events brought me to tears. Many days later I was able to share it with my wife and daughter, later some close friends and then the church. What does it all mean? Well, I discovering a little more each day. Understanding is coming but I don’t know, not completely and for now I’m comfortable with that, I trust God. His love for me is overwhelming, it’s comforting. I feel safe and secure. He knows what he’s doing and he will bring it all to pass.

This is the end of my 11/11 experience but God isn’t finished, there’s more. On January 10, 2006 I had another very powerful supernatural experience, actually two. I’ll write more about them in the near future.

Copyright © Tom Zawacki 2006
Posted by Emancipation of the Freed at 3:53 AM