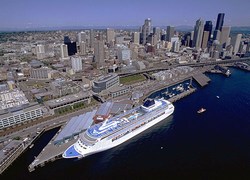 (Yep, that's our ship! Nadine and I got home a few hours ago. We had a pretty good vacation but seem to have brought home a case of stomach flu, it's nice to be home.)

A Celebrity cruise ship returns to port today after doing the Inside Passage with 115 norovirus infected passengers. You never hear of noroviruses (norovirii?) unless a whole cruise ship or an entire school is infected because they're common enough to be unremarkable. Just some highly contagious digestive issues - When it ruins a cruise, though, we can't let it pass without comment.

Seattle Times says the ship left from Seattle last Friday so they must be talking about the Mercury that docks at Pier 66 in Belltown. It's scheduled to leave again today, so if you're on that cruise and you're just popping in for a little Seattle internet action before you head out, we advise that you not inhale. The ship's probably drenched in bleach.

This is, by the way, the same boat whose captain was arrested for showing up for work drunk two weeks ago. Good times for the crew of the Mercury lately.

Image courtesy of Port of Seattle.

(ht) Dan in http://www.seattlest.com/archives/news_seattle/
Posted by Emancipation of the Freed at 1:21 AM

Email ThisBlogThis!Share to TwitterShare to FacebookShare to Pinterest
Labels: Family