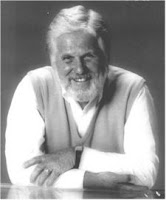 Years ago in , I got into a taxi cab with an Iranian taxi driver, who could hardly speak English. I tried to explain to him where I wanted to go, and as he was pulling his car out of the parking place, he almost got hit by a van that on its side had a sign reading The Pentecostal Church. He got real upset and said, “That guy’s drunk.” I said, “No, he’s a Pentecostal. Drunk in the spirit, maybe, but not with wine.” He asked, “Do you know about church?” I said, “Well, I know a little bit about it; what do you know?” It was a long trip from one end of to the other, and all the way down he told me one horror story after another that he’d heard about the church. He knew about the pastor that ran off with the choir master’s wife, the couple that had burned the church down and collected the insurance—every horrible thing you could imagine. We finally get to where we were going, I paid him, and as we’re standing there on the landing I gave him an extra-large tip. He got a suspicious look in his eyes—he’d been around, you know. I said, “Answer me this one question.” Now keep in mind, I’m planning on witnessing to him. “If there was a God and he had a church, what would it be like?” He sat there for awhile making up his mind to play or not. Finally he sighed and said, “Well, if there was a God and he had a church—they would care for the poor, heal the sick, and they wouldn’t charge you money to teach you the Book.” I turned around and it was like an explosion in my chest. “Oh, God.” I just cried, I couldn’t help it. I thought, “Oh Lord, they know. The world knows what it’s supposed to be like. The only ones that don’t know are the Church.”

When you joined the kingdom, you expected to be used of God. I’ve talked to thousands of people, and almost everybody has said, “When I signed up, I knew that caring for the poor was part of it—I just kind of got weaned off of it, because no one else was doing it.” Folks, I’m not saying, “Do some-thing heroic.” I’m not saying, “Take on some high standard, sell everything you have and go.” Now, if Jesus tells you that, that’s different. But I’m not saying that. I’m just saying, participate. Give some portion of what you have—time, energy, money, on a regular basis—to this purpose, to redeeming people, to caring for people. Share your heart and life with somebody that’s not easy to sit in the same car with. Are you hearing me? That’s where you’ll really see the .

(ht to ysmarko via jordon cooper, via think christian)

Posted by Emancipation of the Freed at 11:42 AM