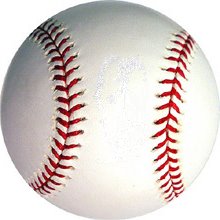 So, in the Spirit, I’m standing in a place of complete and total whiteness. I’m very much at peace, relaxed and wondering what - if anything would happen next…

The Baseball
Much to my surprise I see a baseball, yes a baseball and it’s headed directly toward me. It’s a brand new ball, spotless and it stops right in front of my face. It’s just floating, hovering there, so close in fact that it covers almost my entire view. It’s so close and the image is so clear that I can see the intricate details of the red stitching and the texture of the white rawhide.

I was both amused and amazed by this sight before me. As I wondered to myself why was I seeing this baseball the thought occurred to me that maybe I should catch it. So, I slowly reached up with both hands and took hold of the ball. As I brought the ball down I could see behind it and there was the Lord. Jesus was standing, oh maybe 25 feet away. Even though I couldn’t see His face I somehow knew that He was smiling. I could sense that he was pleased. Pleased that I was in this place and that we were together. He looked at me, without saying a word, motioned with his arm and a sight shrug of his shoulder for me to throw him the ball, so I did and for a while we just played catch. There may have been some theological, metaphorical or philosophical reason that I got to play catch with Jesus in this great whiteness but in these moments it just seemed like fun.

The Diamond
At some point we finished playing catch and I noticed that the whiteness behind the Lord has changed. Now behind Him was a little league baseball diamond. It had perfectly manicured bright green grass, smooth soft undisturbed brownish base paths and four bright white bases. Behind home plate was a fence, three sided like you’d see at any little league diamond. We were standing off to the first base side of the field; this is where we had played catch. Although no one else was there I suddenly knew exactly where I was.