(This is my home town, my people & my church - God has been very good to us! This truly is a new day. Read and be encouraged... Tom)

Members from 25 Churches Across Tri-Cities Gather to Mark Period of Fasting and Unity
By Sara Schilling, Tri-Cities Herald staff writer 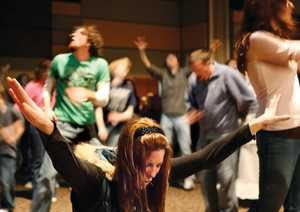 Sarah Westergren of West Richland prays along with around 2,000 other Christians to songs of praise and worship that were performed by a band composed of members from various local churches during the final prayer meeting at in .

Almost everyone stood. Some people leaned on canes or chairs for support. Some people held young children in their arms.The men and women from at least 25 Christian churches throughout the Tri-Cities recited the Bible verse Psalm 133, projected on large screens at the in . "How good and pleasant it is when brothers live together in unity!" they said.

The recent prayer meeting marked the end of a 40-day period of fasting and seeking God's guidance that was meant to unite Tri-City churches across denominational lines. A small group of pastors got the idea for the fast and encouraged church members to give up something -- candy, TV, text messaging -- and devote their extra time to God.

The weekly prayer meetings started in January. The first one drew about 450 people. Sunday's meeting was so big that most of the 2,100 chairs set up at the convention center were filled. "It's pretty exciting," Pastor said of the turnout at the events. He's from Foursquare Church in . The pastors who organized the series plan to keep meeting and seeking God's direction. Other pastors are welcome to join in. The next meeting is Feb. 20.

"There's a lot of excitement about what's next, how (we're) going to follow up on this," said Pastor David Parker of in . There was a buzz in the air Sunday as people took their seats in the rows of chairs. "It's bringing all the churches together and praying for the Tri-Cities ... That's the reason we're here -- the hope of Christ," said Roger Olson, 54, of . He attends in .

A few rows over from Olson was a youth group of 34 students from in . Some of the teens swayed to the praise music and others moved up front near the stage. "It's been awesome, a time of renewal and laying before the throne and seeing what God wants us to do," said youth leader Quontica Sparks, 30, of .

The crowd was diverse. There were little kids and old men and women with gray hair. There were people in cowboy boots and others in Converse sneakers. One estimate had members of 50 different churches in the audience. The meeting started at 7:14 p.m., a nod to the Bible verse 2 Chronicles 7:14, which is a call to repentance and prayer. Many of the seats were filled a half-hour before the service began. That also happened at other meetings during the series, Parker said.

"It's just a sign that we had struck a deep chord with Christians in the Tri-Cities. People were really hungry for this. I think part of what people were really hungry for was a sense of crossing lines and connecting and unifying," he said.A worship band with musicians from seven churches played upbeat praise songs as people danced and waved flags.The band finished the 25-minute set with a slower song that went, "Hallelujah, hallelujah, hallelujah, our God reigns."

At the end of the song, the drums, keyboard and guitars were silent and the sound of a cappella voices singing in harmony filled the room. The crowd split into groups of three or four people for more prayer. Some sat together with their heads bowed; others stood and held hands. "We pray that those who don't know you, Lord, would come to know you," one man said, with his eyes closed tight. "All these things, Father, we lay upon you," said another man, praying with a group across the aisle.

A woman rocked back and forth on her feet as she talked to God. "We love our brothers and sisters. Father, we want more of your presence. We want more of everything you have for us," she said. Sunday's service had more singing, and some people offered prophetic messages they believed God was asking them to share. The group prayed again, all together. They stood and renounced arrogance and pride. They prayed for cooperation between the cities. "We loose the spirit of truth and light and love," the 2,000 voices said, "that many may come to faith in the one true living Lord Jesus Christ."

Posted by Emancipation of the Freed at 12:04 AM

Email ThisBlogThis!Share to TwitterShare to FacebookShare to Pinterest
Labels: Prayer